Why Africa needs 365 days of Action Against Gender-based Violence

Sunday afternoon. I make my way into the busy Makina neighbourhood, just a small part of the sprawling Kibra slum in Nairobi. My host is Zuleika Yusuf, a young woman who leads a small but dedicated team – Woman Beyond Borders - that rescues women and girls from gender violence. She leads me through the crowds. Animated young men mill around roadside TV halls adorned with the day’s English Premier League fixtures. Vendors, mainly women, line up the fringes of the dusty streets with foodstuff. A few people greet us as we proceed. Twice, she is stopped by someone who wants to catch up on an issue or two.

We abruptly take a left turn and exit the streets. From here, the way to the house is a maze of narrow corridors that burst into wide openings – courts of sort - trapped within dozens of small tin-roofed houses with thick mud and cement walls. In the open spaces women slouch over heaps of clothes washing. Some are freeing the hanging lines to pave way for a second round of washing. It strikes me that I haven’t seen a single man from the time we left the main street to the time we reach Zuleika’s house at the far end of the maze. This first-hand experience gets me thinking about care and domestic work and sets a good background for our discussion as we sit down for the interview.

‘‘When we started rescuing women and girls from violence last year, I was threatened and branded a home breaker. I am happy that the community is beginning to appreciate our work,’’ she says. Her statement underscores the important role played by human rights defenders in confronting Gender Based Violence (GBV) and the danger they face.

First, she takes me through brief profiles of some of the many cases they have handled since last year. They are heart-wrenching: ‘‘There’s this woman who was cooking when she had a disagreement with her husband, the husband got angry and kicked the charcoal stove which had boiling water. All the water plus the hot charcoal poured on the woman. We lost her.’’

Even though Zuleika’s group was formed early 2020 as a response to an urgent need in the community, what really got her started and which still nudges her on is her personal experience with violence. As a child she ran away from physical violence only to find more of that in the streets where she also got raped. And when she thought she could find refuge in early marriage, things just got worse for her. She has been married twice, and has four beautiful children to show for it, but also ugly physical and emotional scars inflicted by her former husbands.

Her warm personality and natural smile perfectly mask the trauma from her past. But I know better because the last few times I have called her to plan for this meeting she has been in the clinic for check-up. A scan conducted on her head after one of the most violent attacks by her ex-husband revealed that she had blood clots. She hopes she will get better soon because the doctors said she might need surgery if her condition deteriorates. Her sight is also getting weaker due to the frequent battering she suffered in the past. ‘‘I am not ashamed of my past. I share my story so that many women who suffer violence can know that they are able to get out of it,’’ says the human rights defender. What she regrets is that she took too long to get out of such abusive relationships. This, she says, is the case with many women who are encouraged by the community to stay on and try to make the marriage work or simply do not have somewhere to go because they, like herself, come from very poor families. She recalls that at one point doctors at the Kenyatta National Hospital, the country’s biggest public health facility, who had monitored her case over time ‘admitted’ her at the hospital for six months after treatment only to keep her safe from her then abusive spouse.

Like many African countries, Kenya lacks safe houses and rescue shelters where women and girls fleeing violence can get temporary shelter as they recover. When Zuleika and her team receive victims of violence they call 1195, the national GBV helpline, which sends over an ambulance, in cases where the injuries are serious, and the victim is taken to the nearest Gender Violence Recovery Centre for medical attention. But the journey towards justice is long and winding. In the meantime, victims have to go back into the community or even to live with the offender during which time they are induced or threatened to drop the case. ‘‘This is what makes our work difficult. If we had a rescue centres that victims can easily access, many more women would have received justice,’’ she says. To demonstrate her point, she reaches out to her smartphone and shows me graphic images of a badly wounded face. ‘‘We rushed her to the hospital the other week when the husband was about to kill her. Now she’s getting better, but we can’t proceed with the case because she has decided to go back to live with the man.’’

The world marked this year’s 16 Days of Activism against gender-based violence with a common observation that violence against women and girls has sharply shot up under the COVID-19 pandemic. Woman Beyond Borders say they are seeing a lot more cases but are not sure if the vice has become more prevalent or if the pandemic has only helped to bring it to the surface.

A cursory look at media coverage of how African nations marked the 16 Days of Activism depicts a continent that is fully aware of a bad situation that is getting worse. In many instances, government leaders explained what they were doing to tame gender violence and highlighted the challenges.

In Ethiopia, President Sahle-Work Zewde, possibly alluding to the Tigray conflict, said “As we launch the 16 days GBV activism this year, our situation and particularly the context we are in requires a 24/7 approach to address GBV. These days women and girls become the victims of warring parties.”

In South Africa, President Cyril Ramaphosa said "Men must respect their wives and girlfriends and understand that being in an intimate partner relationship is never justification for domestic violence. If each man gathers two men and the three pledge to never rape a woman, never lay a hand on a woman and hold each other accountable to this pledge, we can start to seriously tackle gender-based violence in our country.’’ 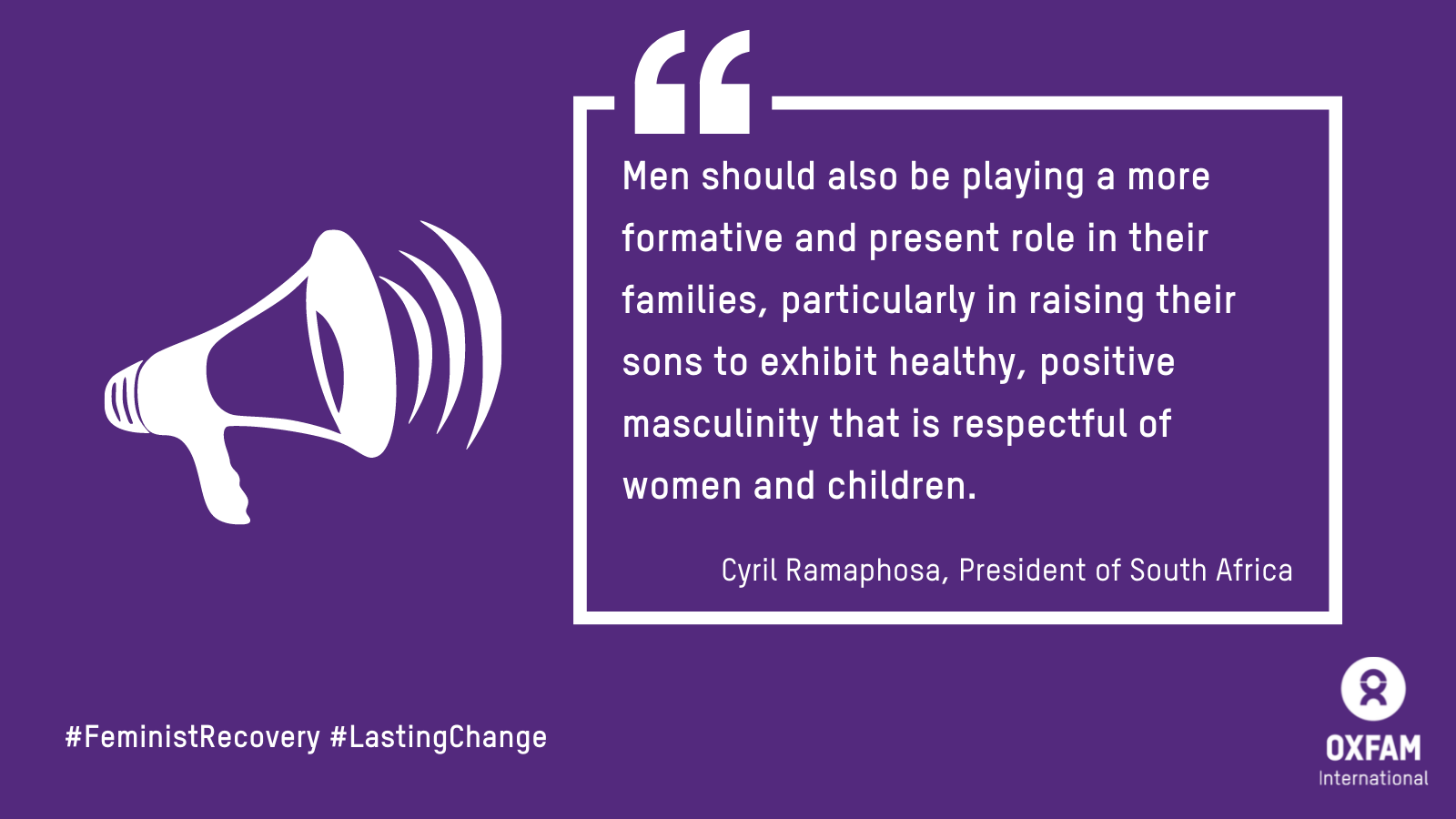 These bold statements by leaders are welcome, says Felister Gitonga, Gender Justice Lead at Oxfam Pan Africa Programme. But more important, she adds, that leaders act by enacting and implementing policies that protect women and girls from all forms of harm and injustice directed at them due to their gender and sexual orientation.

Alongside such high-level pronouncements on GBV, citizens and actors in the grassroots like Zuleika have also had the opportunity to share their experiences and perspectives. In the past two weeks, she has spoken on several media outlets and at meetings convened by Civil Society Organization and hopes her voice will account for something.

Oxfam, Femnet and other partners co-organized a series of national dialogues in ten African countries and one regional convening that drew linkages between Unpaid Care and Domestic Work and GBV. Under this initiative for a gender-just post COVID-19 recovery was an interesting interactive radio talk show supported by Oxfam in Uganda and the Uganda Women’s Network that discussed the need to confront patriarchy which apportions women the sole responsibility for unpaid care and domestic work which in some cases is supervised by violence from men.

‘‘I have married my wife, and wages and remunerations were not among the issues we agreed on. Then she changes her mind that I should pay for her services. Don’t you think it will bring gender violence?’’ one listener posed in a text message to the show host.

‘‘In Katakwi I sentenced a man to 33 years for beating his wife and the wife died … because she had not prepared atapa (millet bread). And I asked him if you mingled the atapa and you ate, what would you lose? Would you lose your manhood? He said, ‘nothing - but you know I married her to cook,’’’ said Hon. Justice David Batema, one of the show’s panellists, while explaining the connection between unpaid care work and GBV.

The intersection of violence against women and unpaid care work is one area that has not been fully explored though anecdotal evidence shows a close relationship between incidence of gender-based violence and the burden of unpaid care work as well as women’s abilities to earn an income. ‘’In my community, a woman does almost all the work at home and is in some cases beaten up by the husband if she fails to or does not perform to the husband’s satisfaction,’’ says Zuleika. Apparently, the reason the lady who she said had gone back to live with the man who beat her almost to death was that she had not cooked for her husband, ignoring the fact that they did not have the food to cook. 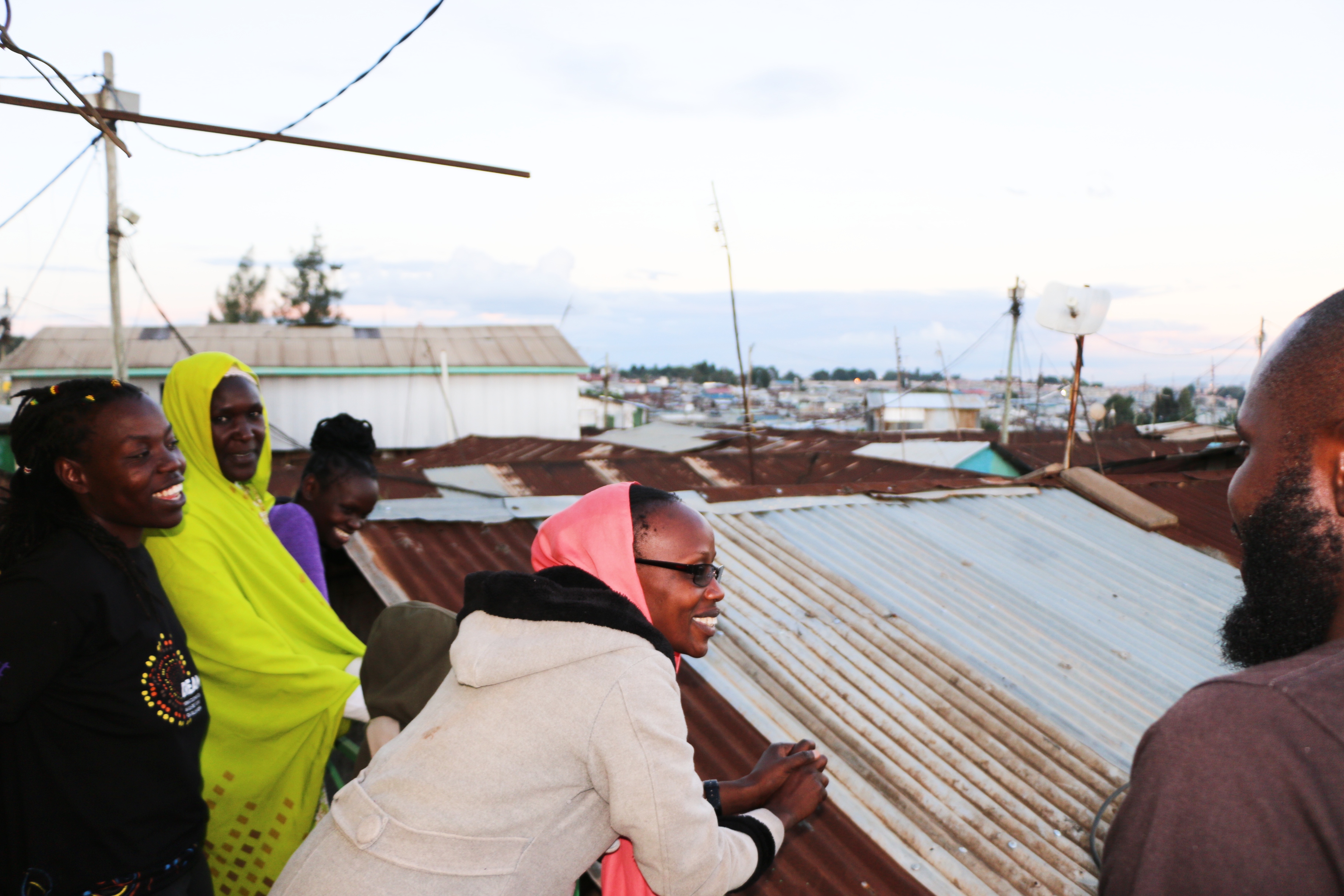 Even as gloomy as their experiences with GBV in the neighbourhood appear, Zuleika and her team hope they will one day invite me over again for happier stories. They know just too well that this means they must do a lot more in helping victims and educating the community to respect the rights of women and girls. Their main fear is that theirs might be a long journey if the government does not make stopping GBV its priority like they have. Ending violence against women and girls will take more than the spectacular displays and the posturing that characterise the 16 Days of Activism. It will take consistent action all year-round by stakeholders at all levels: government, civil society, community and the individual.