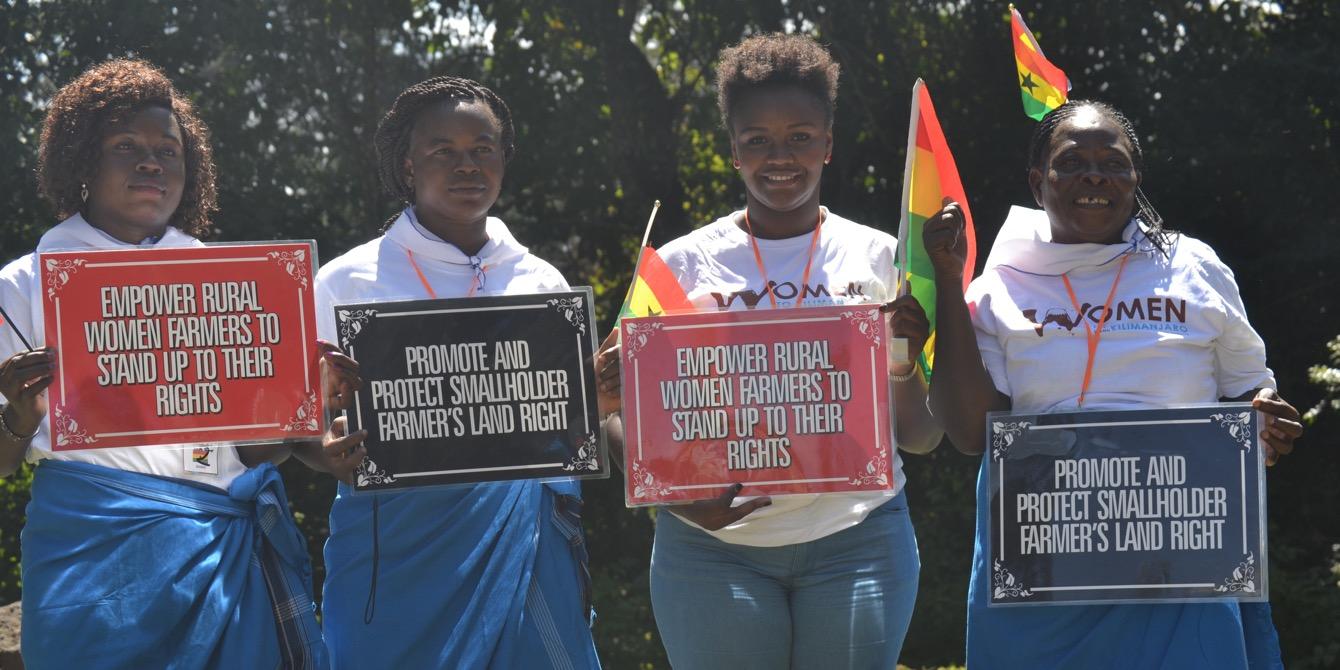 A section of African women rural farmers: hiking Mt. Kilimanjaro was a symbolic gesture of the uphill task of addressing women land rights in Africa

Because of what we have been seeing happening around us women, we decided to embark on a journey. We organised ourselves as African women continentally starting from various countries, regions and then continental
Lovelyn Nnenna Ejim
rural farmer from Nigeria

When Lovelyn Nnenna, a rural small scale farmer from Nigeria set off, with dozens of others to hike Africa's tallest mountain, her mind was clear. She had all the intentions of making a point to the world that women land rights are achievable just as conquering the mountain.

Earlier in 2012, a group of farmers facing various land rights challenges had come together to brainstorm on ways in which they could address their common predicament. From this roundtable, an innovative initiative was birthed and in its third anniversary this year, the Kilimanjaro Initiative came to being. The initiative sought to mobilize rural women farmers from across Africa towards an iconic moment at the foot of Mt Kilimanjaro in October 2016, using women’s rights to land and productive resources as an entry point for the mobilization of rural women to define the future they want.

"There was a thinking around having to create a space for rural women to talk about issues of land that are dear to them, and share with us their experiences on how they have not been able to enjoy the same rights as their male counterparts" Leah Mugehera, Oxfam Pan Africa Programme Gender Justice and Women’s Rights Lead said.

Worldwide, up to 2.5 billion women and men depend on indigenous and community lands to survive. These lands, covering more than 50 percent  of the world’s surface are held, used or managed collectively. Small-scale producers are responsible for 70 percent of the world’s food, many of whom rely on natural resources that are held in common. Securing land rights therefore, help communities to manage their land more sustainably, to access credit, diversify activities and carry out investments. It can boost farmers’ productivity by 60 percent and more than double family income.

Women’s land rights are particularly important given their crucial role in ensuring local food security and managing community resources. Food and Agriculture Organisation (FAO) estimates that closing the gender gap in agriculture,  could increase production by 20-30 percent. Research has shown that women’s land rights are also associated with better health and nutrition outcomes.

"Because of what we have been seeing happening around us women, we decided to embark on a journey" Lovelyn Nnenna Ejima, a rural farmer from Nigeria said. "We organised ourselves as African women continentally starting from various countries, regions and then continental and said, it is long time we sat down and watch. Let us go and climb mount Kilimanjaro as a symbolic effect so that when we come back we develop a charter to hand over to the African Union which we did. It was very hectic though".

This platform seeks to afford rural women space to engage with and seek accountability from decision makers at national and continental level, with a view to securing fundamental, irreversible shift and commitments on women’s land property rights. During the inception, three regional caravans departed simultaneously from the South, East and West, culminating in a mass African rural women’s assembly and a symbolic ascent of Mt. Kilimanjaro by a delegation of women to proclaim a charter of principles and demands on women’s access to and control over their land and natural resources. 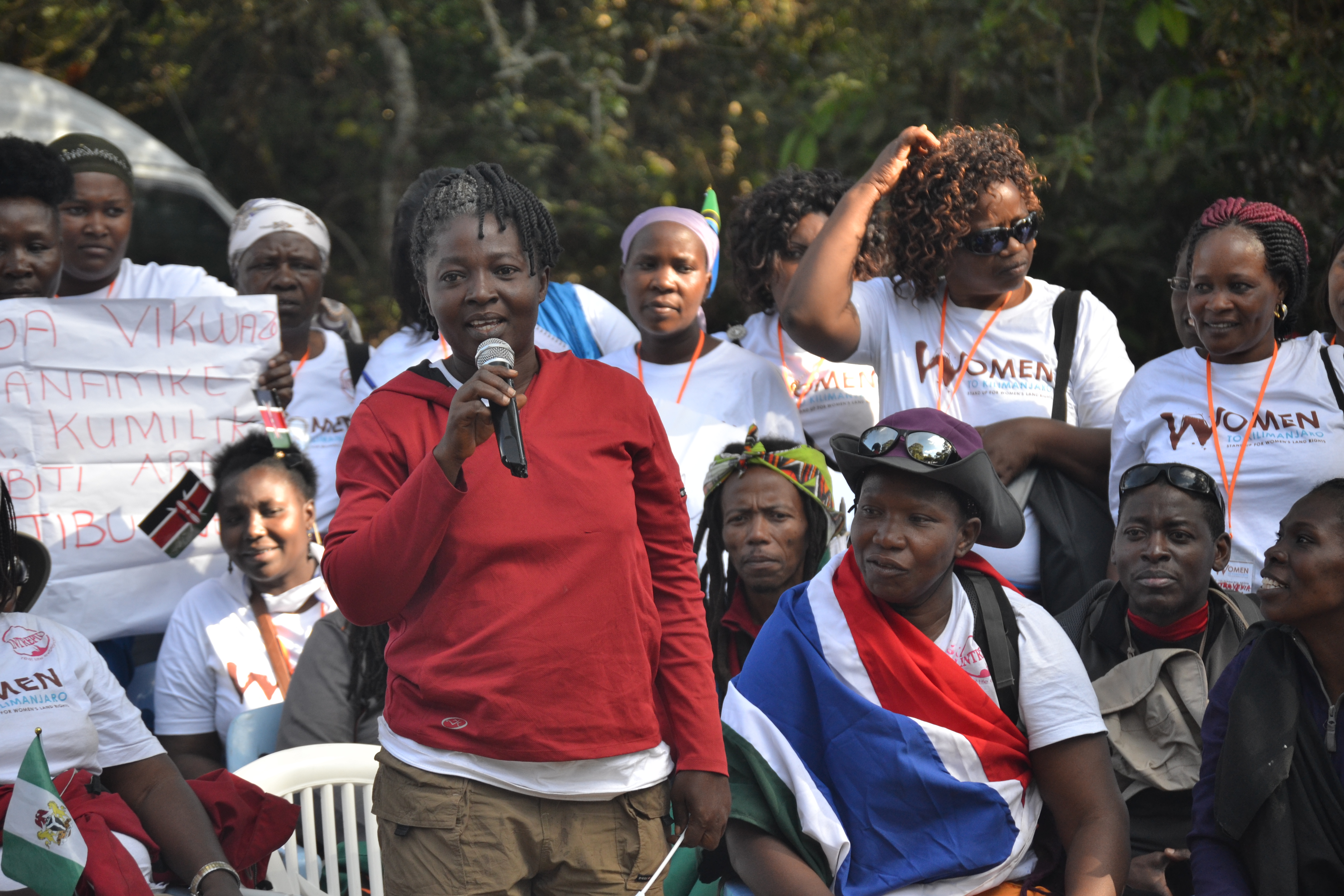 The Oxfam Pan Africa Programme through the various women’s land rights projects within the Gender Justice and Women’s Rights Pillar, has been key in supporting and facilitating the activities of Kilimanjaro Initiative as a member of the Kilimanjaro Consortium. At the Programme, we have been instrumental in enabling the presence of the women beneficiaries at international and continental spaces such as the African Union to demand for and advocate for realisation of women’s land rights. This has been important because the voices and experiences of women at grassroots level have been reflected and their participation in key discussions have been made possible with member states, policy makers and various stakeholders. Pan Africa Programme has also strengthened the skills of these women through trainings such as ‘Understanding the African Union (AU)’ course which adds value to how women engage with different actors and departments of the AU on different land related issues.

The Kilimanjaro Initiative seeks to strengthen the agency and movement of rural women in claiming and defending their land and natural resource rights in Africa. It also seeks to create political will amongst national governments, donor and regional institutions to implement an all-inclusive African women’s charter. This initiative aims at mobilising and supporting the participation of 100,000 rural women in at least 20 countries in Africa while raising awareness on existing frameworks and safeguards around large scale land based investments and demand for their application in securing legitimate tenure rights of rural women in Africa.

The initiative has been working on the three building blocks that include the climb on Mt. Kilimanjaro, the caravan and the mass assembly. Rural women from the 21 countries met in Arusha in October 2016 to consolidate the charter of demands as some climbed Mt Kilimanjaro where they symbolically carried their demands in the form of a flag to the highest summit on the continent as a symbol of their struggle on women land rights. Two caravans from southern and eastern part of Africa made their way to the assembly. Along the way, these women sensitised the public on women land rights and engaged policy makers in their countries while handing over their national charter of demands.

The Kilimanjaro initiatives were aimed at enabling the women to have a signed Charter of demands for women land rights, developed and shared with the African Union Commission representative. The group was also expected to have a workable advocacy plan for post Kilimanjaro indicating how the initiative would engage with decision makers from national to regional and international spheres.

The caravans on their part were meant to celebrate successes and highlight the violations experienced by women on land rights. These caravans went to Tanzania in October 2016. There were three caravans: two from East African bloc, and one from the Southern African bloc. With each departing at different dates, there were a number of activities that took place during the caravan trip to Arusha, Tanzania.

The culmination of the initiative was the handing over of the prepared charter document to the then African Union Chair Dr. Nkosazana Dlamini Zuma and its subsequent adoption by the AU.

The Pan Africa Program strives to address the power imbalance between women and men to bring sustainable change. We will advocate for increased and responsible public and private investment that support small scale farmers, especially women in realizing their rights and entitlements to food security, employment opportunity, land ownership and climate justice.